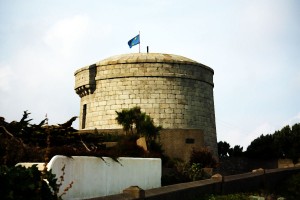 Structure of the Tower

The tower at Sandycove is typical of the twenty-six Martello towers that were built to north and south of Dublin. The building of fifteen towers between Dublin and Bray was authorized by the Defence Act of 1804 and work commenced immediately.

James Joyce Tower, Ground FloorIn the ground floor of the tower, only accessible by the spiral stairway from the floor above, were the magazine and artillery store, where barrels of gunpowder and cases of shot were kept. The partition door was sheeted in copper and had a copper lock and key to avoid striking sparks. A trapdoor in the ceiling led up to the room above. Non-combustible supplies were stored in the open side of the room, where there was a fireplace and two narrow shafts through the wall to admit limited light and air. Since 1978 the open side has been partitioned off and the store area opened up with a new doorway at ground level.

James Joyce Tower, First Floor the more comfortable round room on the next level was the main living area of the tower. The size of the garrison could vary from four to as many as twelve or even eighteen men with a sergeant or an officer in charge, There was a fire for warmth and later a small stove for cooking. As in the room below, the only windows were narrow shafts, angled so that a chance cannon-shot could not enter the room. In the centre of the floor was the trapdoor to the storeroom. An iron loop directly overhead enabled heavy loads to be hoisted up by pulley.

The massive outer door can still be seen, reinforced with sheet metal, bolts and bars against determined attackers. As a second line of defence there was another door inside, overlooked by a suitably-titled Murder Hole in the machicolation above. As in most of the towers the door – the most vulnerable point of the building – faces away from the sea and the threat of ships’ cannon. The removable ladder was later replaced by a fixed one.

James Joyce Tower, RoofOn the roof of the tower is a circular gun deck with metal tracks and a central swivel, where a gun carriage was mounted on a traversing platform. Most towers south of Dublin were fitted with an eighteen-pounder cannon with a range of one and a half kilometres when firing round shot. With canister (a murderous spray of small shot) the range was about two hundred metres. The shot was heated in the oven at the top of the stairs and would have been extremely effective against wooden ships. Ropes would have been attached to the iron rings inside the parapet to secure the gun carriage or to assist in the laborious task of hauling the gun to the top of the tower. The machicolation overhanging the front door contained musket slits and was used to defend the tower at closer quarters.